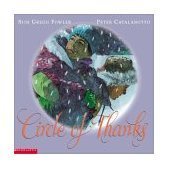 Circle of Thanks
Illustrated by Peter Catalanotto

This modern fable began with the phrase "One good turn deserves another" repeatedly running through my head. I began getting images of a circle of arctic animals, an Inupiak woman resembling a friend who had died some years before, and a chain of kindnesses, of good turns, passed on. As the story progressed, I dropped the "one good turn" phrase, but continued on with the concept. When I first submitted the story to publishers, it opened with an old woman in the far north, not a boy and his mother. After Scholastic took the story, my editor there, Tracy Mack, suggested changing the old woman to a boy, and when I started playing with that change, I found that it worked. The title I submitted the book with changed, too. Originally, it was "A Tundra Tale." After several other ideas, we finally came up with "Circle of Thanks" -- a title which expresses the theme better and has helped make the book a popular Thanksgiving story.

This story speaks to the idea of passing on, rather than returning, kindnesses -- not "I'll scratch your back, you scratch mine," but, rather, passing on to others a measure of the kindness given us. Ultimately, I think, kindnesses large and small do circle around and benefit the whole world.

Teachers have used this book in some fun, original ways. One combined art, culture, and drama and had the children make masks and do performances for parents and other children. A local charter school presented a musical telling of the story at a folk festival, with music including a refrain sung by the children as each animal failed to say thank you. And a trainer of other teachers often reads the story to adult learners at the beginning of workshops. I feel very honored to have people take my work and extend it in their own original, creative ways.

This book is no longer in print.